To share your memory on the wall of Irma Middlebrooks, sign in using one of the following options:

Ms. Middlebrooks loved the Lord and gave her life to him at an early age. She shared her anointing voice every Sunday morning at Church where she also taught Sunday school. She enjoyed sewing, gardening & bowling, subsequently she belonged to a bowling league. She decided in the early 80s to go back to school in which she attended the University of Toledo and Owens Community College, she studied early childhood development. She took that knowledge and became a Teacher's Assistant for Head Start and that is where she retired from in 1998. Nanny was a phenomenal woman with lots of unconditional love that she shared not only with her family but also with other families as well.

To send flowers to the family or plant a tree in memory of Irma Middlebrooks, please visit our Heartfelt Sympathies Store.

Receive notifications about information and event scheduling for Irma

We encourage you to share your most beloved memories of Irma here, so that the family and other loved ones can always see it. You can upload cherished photographs, or share your favorite stories, and can even comment on those shared by others. 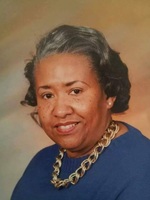