To share your memory on the wall of Elmer McGruder, sign in using one of the following options:

Print
Jean and Elmer McGruder died on May 31 at the Hospice of Northwest Ohio, three minutes apart, and two weeks before the June 13th date of their 67th wedding anniversary.

Mrs. McGruder, who died after a short illness, was born to Manson an... Read More
Jean and Elmer McGruder died on May 31 at the Hospice of Northwest Ohio, three minutes apart, and two weeks before the June 13th date of their 67th wedding anniversary.

Mrs. McGruder, who died after a short illness, was born to Manson and Mamie Stevens Jackson in Hamlet, NC in 1929, and graduated from Capital Highway High School in Hamlet in 1948. She graduated from the Columbia Hospital School of Nursing, Columbia, SC in 1952. After marriage in 1953, the McGruders moved to Toledo, OH where she worked as a registered nurse at the now-closed Maumee Valley Hospital, in South Toledo, and Lake Park Hospital, in Sylvania.

She was an active member at Warren A.M.E. church and served on the Nurses Guild and the Stewardess Board. She was selected as Mother of the Year in the 90s, and was a recipient of the church’s Trailblazers Award in 2019. She also volunteered for the March of Dimes and as a nurse for Red Cross Blood Drives.

She is pre-deceased by her brother Manson Jackson, Jr., her sister Margaret Samuels, and is survived by her sister Barbara Foggie, Winston-Salem, NC.

Elmer, also known as Mack, who died after a long illness, was born to Alphonso and Dora Coleman McGruder in Wedgeworth, AL in 1928, and grew up in Fairfield, AL. He graduated from Fairfield Industrial High School in 1945, and received as B.A. degree in 1950 from Miles College. He received a Masters of Education from the University of Toledo in 1959

He was drafted into the U.S. Army in 1950, two years after President Harry Truman integrated the military. He underwent basic training at Fort Jackson, and fought in Korea, a black squad leader in charge of white soldiers. In a 1999 Newsweek magazine article, he recalled his experiences saying,” When I arrived at Fort Jackson, the city was a sea of racial problems, but the base was an island. It had been only two years since the armed forces were integrated, but in the 14 months I was on the base, there wasn’t a single racial incident. Believe me, I was looking—I had a real chip on my shoulder about being drafted.”

"When we got to Korea, we were replacements in the Seventh Infantry Division, 32d Regiment. It was 1952, and we were in a stalemate at that point, so our duties mostly consisted of patrols. Sometimes you'd draw fire, and sometimes you'd provide covering fire for other companies. I became a squad leader in pretty short order, had maybe 10 or 12 guys in my squad—a mixed squad, more white soldiers than black ones. I was only challenged once that I remember, by a guy from Far Rockaway, N.Y. I gave the men an order to carry 30- or 40-pound boxes of ammunition, and this guy said he wasn't going to. I told him I expected him to do what everybody else was doing, and he backed down. The white soldiers didn't challenge me, because they knew better than to alienate anybody. You never knew who would be saving you next."

While at Fort Jackson, he met his future wife, Jean, when she was in nursing school. After military service the couple settled in Toledo at the suggestion of his older brother, Dr. Charles McGruder, who was a medical resident at Maumee Valley Hospital.

Following job stints at the U.S. Postal Service and Doehler-Jarvis, Inc., he began a career in education, teaching special education at Sherman School. He also taught at Robinson Junior High School, and taught and served as assistant principal at adult education evening schools. He ended his career in 1983 at Scott High, teaching students in the Occupational Work Experience program.

He was an active member of the former Hyatt-Allen American Legion Post #538, where he served as commander. He was also an active member at Warren A.M.E. Church, having served as Sunday school teacher, as an usher, in the choir, and on the church’s board of trustees, and other leadership positions. He received the church’s Father of the Year Award in 1996 and its Trailblazers Award in 2019.

To send flowers to the family or plant a tree in memory of Elmer McGruder, please visit our Heartfelt Sympathies Store.

Receive notifications about information and event scheduling for Elmer

There are no events scheduled. You can still show your support by sending flowers directly to the family, or planting a memorial tree in memory of Elmer McGruder.
Visit the Heartfelt Sympathies Store

We encourage you to share your most beloved memories of Elmer here, so that the family and other loved ones can always see it. You can upload cherished photographs, or share your favorite stories, and can even comment on those shared by others.

Pamela Anderson sent flowers to the family of Elmer McGruder.
Show you care by sending flowers

Posted Jun 16, 2020 at 06:10am
Rest in Peace Gentle Giant and Wife. Always showed me love. Will miss both of your loving faces at church. Best Teacher I Ever Had.
Sincerely Audrey Webster
Comment Share
Share via:
PA

Posted Jun 12, 2020 at 11:49am
Condolences and prayers to The McGruder family. A beautiful couple who will be truly missed. Rest in peace in Heaven . Lucille Boyd and family

Posted Jun 11, 2020 at 05:40pm
I will always remember Mr. McGruder as one of those special teachers. Whenever I would see him, he always remembered me. My God comfort the family and I pray He fills the void that will be left by Mr. McGruder’s passing.
Monica Galloway
Comment Share
Share via:
EV

Posted Jun 04, 2020 at 10:37am
Wow, "my friend" is now at peace. Life is full of people that you will never forget and I thank God that our families met and grew together. Warren AME has had many blessings and we are still to give Glory to God!! Love Always, Kimberly L. Bailey and Family.
Comment Share
Share via: 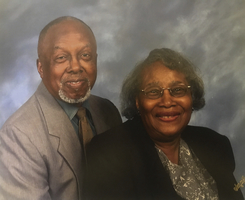