To share your memory on the wall of Tedra Green-Smith, sign in using one of the following options:

Provide comfort for the family of Tedra Green-Smith with a meaningful gesture of sympathy.

Print
A Celebration of Life & Love
Tedra Denise Green-Smith ... Read More
A Celebration of Life & Love
Tedra Denise Green-Smith April 3, 1970 – April 16, 2020
Tedra Denise Green-Smith was born April 3, 1970, Toledo, Ohio to the parents of Harold B. Green and Estell (Green) Rose. She received Christ at the age of 5 years old and was baptized at Calvary Baptist Church, Toledo, Ohio by the late Reverend L.H. Newsome. During her childhood her family later transferred their membership to Family Baptist Church Toledo, Ohio under the pastorate of Reverend Floyd Rose where she was a faithful junior usher. During her adult life she joined Lighthouse Fellowship Prayer Tower, Ottawa Lake, Michigan under the pastorate of Dr. May Dupree. Bishop Michael & Kathi Pitts were instrumental in her latter spiritual life. Tedra always stayed connected to her spiritual upbringing and loved Jesus with all her heart. She and her immediate family had a close, loving bond.

Tedra attended Toledo Public Schools; was a cheerleader at McTigue Jr. High, Toledo, Ohio; was in the choir at Rogers High School. She graduated from Robert S. Rogers High School, Toledo, Ohio June 1988. Tedra was blessed with the gift of music and took piano lessons for several years. She competed in the International Music competition every year always placing first or second solo.

Upon graduation from high school Tedra received a Music Scholarship to Kentucky State University, Frankfort, Kentucky and was accepted into the department of music education in 1988. She was very active—cheerleader, traveled with the Concert Choir, was Homecoming First Attendant her senior year. Tedra graduated from Kentucky State University in 1994 with a Bachelor Music Education Degree. Tedra was an alumni and is still remembered by faculty and classmates as a beautiful person.

Tedra was a hard worker and believed you do your best with the gifts God blesses you with. After graduating from college, Tedra moved back to Toledo, Ohio where she began her career as a music teacher at Toledo Public Schools in 1994. She was a substitute teacher then hired permanently at Pickett Elementary School. Later she transferred to Hawkins Elementary School. For several years she also taught private piano lessons at Craig’s Piano & Keyboards, Toledo, Ohio. Tedra worked part-time since 2008 for Gray Family Homes, Inc, Toledo, Ohio providing care to individuals with developmental disabilities, and the clients and staff loved her. Tedra worked until she no longer could due to her battle against cancer.

In 2002 Tedra was a founding member of the Christian singing group Ushering under the leadership of Minister Art Johnson. Tedra was the vocal coach for the group and sang alto and some tenor. In addition to sharing her melodious and spirit-filled voice with her group she also shared her gift at other events and church functions. In 2015 and 2016 Ushering appeared on the Bobby Jones Gospel Show. In 2016 Tedra was the designated speaker for the group, speaking directly with Bobby Jones on national television in front of a live audience and millions that tuned in. Tedra took part in the production of two studio CD recordings that were released in 2004 and 2011. In June 2019 the group did a live recording to be released in the future featuring Geoffrey Golden and Tedra sang lead, “It’s In My Praise,” with Kimberli Johnson background. Tedra brought life to Ushering and everyone in the group loved her and didn’t want to do anything musical without her.

During her illness Tedra chose to reside with her sister and brother-in-law in Maumee, Ohio. While there, Bishop Michael & Kathi Pitts along with other pastoral care ministers of Cornerstone Church, Toledo, Ohio visited, prayed, and had communion with Tedra. She lived there until she passed; surrounded by her father, mother, sister, brother-in-law, aunt, daughter, son, nephew, on April 16, 2020 Tedra’s spirit left her body and she went to heaven to be with the Lord.

Tedra was a “Sweetheart” and truly loved by everyone who came in contact with her. Tedra will be greatly missed and her “Sweetheart Loving Memory and Beautiful Smile” will live on forever…..

TEDRA'S FATHER, MOTHER, SISTER, AUNT, CHILDREN ARE DEEPLY GRATEFUL TO EVERYONE FOR YOUR EXPRESSIONS OF LOVE, PRAYERS, FLOWERS, MONETARY GIFTS, PHONE CALLS, TEXTS, EMAILS WHILE TEDRA LIVED AND IN HER PASSING

To send flowers to the family or plant a tree in memory of Tedra Denise Green-Smith, please visit our Heartfelt Sympathies Store.

Receive notifications about information and event scheduling for Tedra

There are no events scheduled. You can still show your support by sending flowers directly to the family, or planting a memorial tree in memory of Tedra Denise Green-Smith.
Visit the Heartfelt Sympathies Store

We encourage you to share your most beloved memories of Tedra here, so that the family and other loved ones can always see it. You can upload cherished photographs, or share your favorite stories, and can even comment on those shared by others.

Posted May 09, 2020 at 05:29pm
So saddened to hear of Tedra passing. It's still so hard to believe. As one of Tedra's youth leaders at Family Baptist Church, I remember her as a leader with a gentle spirit, a beautiful smile and multi-talented, yet humble. A couple years ago I saw her at my granddaughters' school, Longfellow Elementary, where I volunteered and where she was substituting as a music teacher. My grandkids and all of the students who had her as a music teacher, loved her. As an adult, Tedra still possessed the bubbly personality that she had as a young person. My heart and sympathy goes out to her children, parents, sister and family. May the good Lord and the Holy Spirit comfort and keep you. Angela Bailey
Comment Share
Share via:
LH

Posted May 03, 2020 at 12:35am
My heartfelt condolences to the entire family of this beautiful young woman! Pattie Page (Thomas) 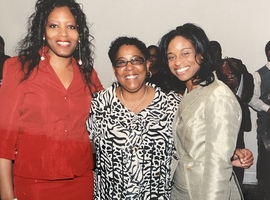