To share your memory on the wall of TayShaun Davis, sign in using one of the following options:

Tayshaun attended Gateway Middle School. He enjoyed riding dirt bikes and 4 wheelers. He also enjoyed hanging with his friends. His favorite phrases were, "you weird", or "you a corn". He had a very playful soul. Tayshaun loved annoying his sisters. He was the best big brother and cousin.

He was preceded in death by his great grandmother, Jackie Justice and uncle, Tyrone Armstrong Jr.

To send flowers to the family or plant a tree in memory of TayShaun Devon Davis, please visit our Heartfelt Sympathies Store.

Receive notifications about information and event scheduling for TayShaun

We encourage you to share your most beloved memories of TayShaun here, so that the family and other loved ones can always see it. You can upload cherished photographs, or share your favorite stories, and can even comment on those shared by others.

Posted Oct 29, 2020 at 10:18pm
Please accept my condolences. I am sorry for your loss. He was a friend of my students and my heart aches for you all.
Comment Share
Share via:
J

Posted Oct 29, 2020 at 05:23pm
At this sorrowful period in your life, please accept my sincerest condolences for the death of your loved one.  Reflecting on the divine promises found in the Bible will give you hope and strength to keep going until all of God's promises are fulfilled. (John 5:28, 29; Romans 15:13; 2 Thessalonians 2:16, 17).
Comment Share
Share via:
M

May Jesus our almighty God of comfort embrace you all with His loving arms as you remember TayShaun's life. Through this difficult time, know that earth has no sorrow that Heaven cannot heal. 'Precious Lord, take my hand, lead me home......' 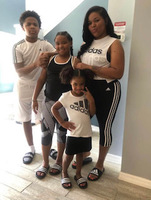