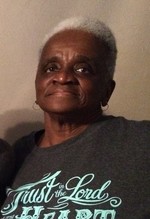 Born on February 18, 1949 at Mercy Hospital in Toledo, Ohio to Reverend Pinkey & Effie Maye Stallings (Shelly). She passed away at University of Toledo Medical Center on May 11, 2020. Rosemary was the second youngest of 6 children, five girls, Carolyn, Patsy, Ann, Loretta and one son, Preston. She loved all of them, but was closest to Loretta & Patsy . When her & Loretta were younger they were like twins, they were always together . As she got older she began to spend time more with Patsy. If she wasn't over Patsy's house they were on the phone talking . Rosemary attended Scott high school and was involved in many different activities but choir was her love, under the direction of David Carter. During her sophomore year of high school, while babysitting for her cousin Linda, she met young gentlemen by the name of Richard D Hague. They started as friends, but once Richard returned from the service they started dating & moved in together. In 1970, they had a son, DeJuan Lamont Hague. DeJuan was his mother's heart & soul the apple of her eye.

Rosemary worked at Holly Glen Care center caring for patients. She was there for several years until she decided she wanted to start her own Daycare. She started Little Effie's Daycare, named after her mother, which she ran until she could no longer do because of her health. Her love of children was proven further when she began caring for Dennis Swanigan, eventually becoming his guardian. Her sister Patsy would often help her with the Day care. Rosemary enjoyed babysitting it was something she did for years, babysitting her nieces & nephews.

Rosemary had a strong faith and was baptized as a child. She attended Mt. Pilgrim Baptist Chruch, where she would serve on the nurse's board & also helped in the nursery. In the late 90's, Rosemary became a grandmother, something she loved so much. Her first was Kierra, whom she nicknamed Buddha, followed by Brenden Jacob (BJ) and then Kaila (Boo).

In 2007 Rosemary found out she had cancer. She wasn't going to let it stop her or get her down. She would say, "I prayed about it, I know God is going to take care of me." After living with her son for years, she was excited to move into her own apartment. She moved into Dorrell Manor a place with residents mostly her age where she lived until she was hospitalized. While living there, she developed friendships with other residents, saying they were like family. She was always trying to help someone and would often run errands for others before doing for herself.

Rosemary was loved and will be remembered by her son DeJuan Hague (Tirani), two granddaughters, Kierra Hague and Kaila Hague, one grandson, Brenden Hague, one brother Preston Stallings (Virginia), two sisters, Sandra A. Crawford and Loretta Lawson (Wayne) as well as many nieces and nephews and other family and friends.