To share your memory on the wall of Rosa Holmes, sign in using one of the following options:

Provide comfort for the family of Rosa Holmes with a meaningful gesture of sympathy.

Print
Rosa Lee Holmes, 93 was born February 9, 1927 to Michael and Nettie Ann Rutledge in McClellanville, SC. She was the third of five children and their first born daughter.

She was united in holy matrimony to James Edward Holmes Sr. in 194... Read More
Rosa Lee Holmes, 93 was born February 9, 1927 to Michael and Nettie Ann Rutledge in McClellanville, SC. She was the third of five children and their first born daughter.

She was united in holy matrimony to James Edward Holmes Sr. in 1948. They relocated to Toledo in 1949. To this union five children were born.

When she moved to Toledo, she united with the St. Paul A.M.E Zion Church under the Pastorate of Rev. G. W. Oliver. Rosa Lee accepted Christ at an early age. She was a faithful member of St. Paul A.M.E. Zion Church for over 70 years. She was an active member until her health prevented her from attending. She was an advisor to the Junior Usher Board, a Class Leader, an officer with the Oliver Circle, and most known as an usher on Usher Board No. 1, which she took very seriously. Rosa made sure her children were involved in church. She was a bold, blunt and beautiful soul, always expressing her true feelings in every situation. She was known for her delicious peach cobbler. The impact she has had in her 93 years will forever live on.

Rosa Lee was an awesome mother and hard worker. She sometimes worked multiple jobs to support her family. She was a Nurse’s aide, Food Service Worker for Toledo Public Schools, and Teacher’s Aide at Ella P. Stewart School. She also worked for Toledo Building Services to name a few.

Rosa Lee Holmes, affectionately known as Gram and Nana Rosa 93 departed this life on May 13, 2020 at The University of Toledo Medical Center. The family of Rosa Lee Holmes would like to express special thanks to the nurses, staff, and caregivers at Heatherdowns Rehabilitation Center and also the medical team at The University of Toledo Medical Center. Thank you for your hard work, compassion, and your caring heart. It is very much appreciated.

To send flowers to the family or plant a tree in memory of Rosa Lee Holmes, please visit our Heartfelt Sympathies Store.

Receive notifications about information and event scheduling for Rosa

There are no events scheduled. You can still show your support by sending flowers directly to the family, or planting a memorial tree in memory of Rosa Lee Holmes.
Visit the Heartfelt Sympathies Store

We encourage you to share your most beloved memories of Rosa here, so that the family and other loved ones can always see it. You can upload cherished photographs, or share your favorite stories, and can even comment on those shared by others.

Posted May 20, 2020 at 04:12pm
To Deborah, Ronnie, James and the other family members. It sadden our hearts when we heard of Mrs. Holmes passing. Mrs. Holmes was always straight forward in her conversations she did not bite her tongue. I (Norma) ushered with Mrs. Holmes, once I became a true adult. We all took turns picking your mother up and taking her to various meetings at Church.
We also took turns picking your mother up and taking she and our mother to the Oliver Circle meetings. Now another Oliver Circle member has joined the Circle. Our family the Fletchers will always remember her. Our prayers go out for your strength during this time. We will miss you Mrs. Holmes. The Fletcher Family
Comment Share
Share via:
JW

Posted May 20, 2020 at 07:29am
May your heart find comfort knowing that your love one is at home with the Lord
Love Gwendolyn E.March Jones & Family
Comment Share
Share via:
JS

Posted May 19, 2020 at 03:12pm
dearest Deborah , I was deeply saddened to hear of Holmes death . We sat side by side in Church. I have many fond memories
of our time together . We also ushered together. I will really miss her. You are in my prayers and may God give you a peace that
surpasses all human understanding. Jackie Simmons
Comment Share
Share via: 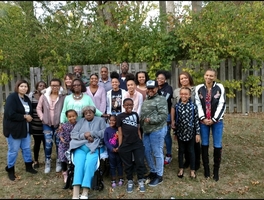