To share your memory on the wall of Roosevelt Nix, sign in using one of the following options:

Rosie accepted Jesus Christ as his Lord and Savior at an early age while attending Third Baptist Church. He joined St. Paul AME Zion in the early 70’s under the direction of Reverend. George W. Maize III where he served as a trustee for many years.

Rosie moved to Toledo, Ohio with his parents at the age of two and attended Hillcrest and Lincoln Elementary Schools and Macomber High School. 0n November 29, 1961, he joined the United States Air Force. He was honorably discharged on October 11, 1965. Rosie then went on and was just two credits short of an Associates Degree from the University of Toledo. Soon after he left the Air Force, he began his long working career at Doehler-Jarvis where he worked until 1969. On December 29, 1969 he began his career at Sun Oil Refinery where he spent over 45 years. He retired several times but continued to be drawn back to the plant to “Hug that Hard Cold Steel.”

He was an avid football fan following the Pittsburg Steelers where his Grandson, Roosevelt “Rosie” “Delbert” Nix is currently playing as a Fullback. He also followed Michigan State University where his Grandson Micajah Reynolds played defense and in 2014 Rosie, Barb and Londa traveled to Pasadena to see their first Rose Bowl game. Michigan State walked all over Stanford. Rosie also attended the 2018 Pro Bowl in Orlando after Delbert was selected as a fullback. Rosie described that as being one of his top ten experiences in his life. Rosie also loved his Ohio State Buckeyes, and although they choked with Clemson this past season, he looked forward to their comeback in the fall. Every opportunity he had, he traveled coast to coast to attend a game and see his grandsons play. There was also a time that you would often find Rosie, Barb, and the girls throwing strikes at the local bowling alley or piled up in their big brown conversion van seeing the sights on the Washington Mall or New York Harbor.

Rosie kept the highways “hot” traveling, as family was very important to him. For his family and friends, whether a wedding, a funeral, a graduation, or bar mitzvah, Rosie was there! He was a very active member of the National Buford Family Reunion and the Clements-Stinson Family Reunion. He enjoyed cruising around the globe, and spent many holidays and vacations in Nebraska, Colorado, Alabama, Georgia, New York and California with his extended family and friends.

Rosie was married to the love of his life Barbara (Adams) for almost 43 years. To this union, two daughters were born, Rochelle Louise and Rolonda Lynette Nix. Rosie got a second round of grandparenting as we welcomed James, William, and Nevaeh (his Stank) into the family and they became the light and love of his life. He spoiled them rotten and did his best in the time he had with them to nurture and demonstrate what family means with them.

He was preceded in death by both of his parents, his brother Charles Nix, sisters Rosetta, Patricia, and Marsha Nix and daughter Rosalind Nix.

In life, Rosie was known for saying, “Life Is For The Living….” and live he did. He would always say, “Getting Old Ain’t For Sissies”. He was a hard worker and instilled in his children that strong work ethic. The last thing he told his daughter Shelley was, “go to work.” He believed in working hard and playing even harder and that stance took him and his family all over the world.

As a family we pray those memories will hold us as we grieve the physical loss of Dad. While we don’t believe he was ready to leave us just yet, we know, he believed that his Lord does not make mistakes and he would want us to celebrate, have a cocktail or two, and remember all the love and lessons he gave us in this life.
The family would like to thank his St. Paul A.M.E Zion family, Reverend Ronald L. Bailey, Reverend Melody Bowen Hall, Reverend Dwight Gutridge and all the loving staff at Fresenius Dialysis Center of Perrysburg.
Read Less

To plant a memorial tree in honor of Roosevelt Nix, please visit our Heartfelt Sympathies Store.

We encourage you to share your most beloved memories of Roosevelt here, so that the family and other loved ones can always see it. You can upload cherished photographs, or share your favorite stories, and can even comment on those shared by others.

Posted Mar 18, 2020 at 08:09pm
We will miss Rosie, and the time our families met and spent time together at 2114 Upton Ave. in the seventies. Never will forget the night Rosie and I bet who could ride their bike from Upton to Pearson Park, With our wives trying to stop us. we both made it there and back. As we know Rosie would never back down. Our daily conversations in the basement by the washing machines, the best we could do for a man cave and sharing our trials and tribulations, family, jobs and of course Inky Pizza.

May God Bless, Barbara
and Family

Roger Adams purchased flowers and planted a memorial tree for the family of Roosevelt Nix.

Posted Mar 17, 2020 at 07:30pm
We share your loss and wish we could be there; please know we are with you in spirit. With much love and admiration.

Flowers were purchased for the family of Roosevelt Nix.

The Banks Family purchased the Vivid Recollections and planted a memorial tree for the family of Roosevelt Nix. 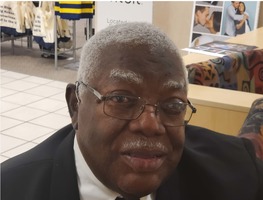