Obituary for Nina A. Miller 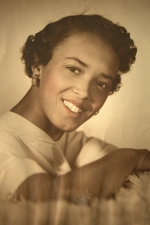 Nina's life begun on November 28, 1934 in Raleigh West Virginia to parents Chauncey & Johnnie Wood. She departed this life on November 7, 2020 in Toledo, Ohio. Nina is the eighth child of 14 in which 6, Anna, Esther, Chauncey, Jeffery, Vernon, and Charlotte proceeded her in death and are now together with the Lord.

Nina relocated to Toledo, Ohio where she met and married Charles L Miller in 1955 and had 7 children. Nina worked at a potato chip factory then became part owner of C & N Carry-Out. She was well known in the neighborhood and deeply loved. All the children in the area were considered as hers because it really takes a village. Nina moved to Seattle in 1977. She worked for the Seattle Tennis Club as a chef. She also worked for Nanny Faye's House of Love Daycare. After retirement Nina moved back to Toledo. Nina touched a lot of hearts and will be missed dearly.