To share your memory on the wall of Ned Bunn, sign in using one of the following options:

Ned (affectionately known as 'Duke' & 'Unc') was a man of faith who gave his life to Jesus Christ many years ago and once studied to be a Deacon. Ned attended Choctaw County High School in Lisman, Alabama. He loved and cherished his family and he loved his music, (Otis Redding & Sam Cook were 2 of his favorite artists). He loved dancing and playing the drums and even traveled for a brief time with Griswald's Band.

Ned was proud to be a part of the Civil Rights Movement in the 1960s. He participated in the March in Lisman, Alabama and several others in the south before relocating to Ohio. Ned was a hardworking man. He worked at Libbey Glass Factory and was successfully self-employed as a Hauler and Handyman for many years and only recently retired due to illness. He was always there to help his family and could repair just about anything from washers and dryers to lawnmowers, and much more.

Ned was married to Carol Jean (Schnabel) and from their Holy Union, four sons were born, Christopher, Sr., Quincy, Ned III, and Maurice.

We encourage you to share your most beloved memories of Ned here, so that the family and other loved ones can always see it. You can upload cherished photographs, or share your favorite stories, and can even comment on those shared by others.

Plant a Tree in Memory of Ned
Plant a tree
0 trees have been planted in memory of Ned Bunn Jr.
RF

Posted Feb 24, 2020 at 06:24am
To the sons and the Family of Ned Bunn...We are saddened to hear of Neds passing....Praying for strength and understanding....Jesus will carry you through....💛
Comment Share
Share via: 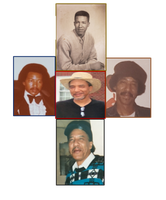