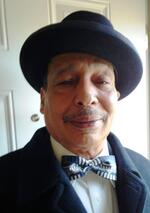 Michael Roscoe Doles Bey was born on January 11, 1955 in Toledo, Ohio to the union of Roscoe and Marian Doles. He departed this life on April 28, 2021.

He was born and raised in Toledo, Ohio. Attending Toledo Public Schools, he was a graduate of Rogers High School.

He was the owner and operator of Omnific Signs and Designs. His work is on display nationwide, as he applied his talent to many venues. He was employed at Davis Fabricators, where he loved to work, and had been there since 2006.

He had an active life of service to many causes, from the great program of Alcoholics Anonymous, the Nation of Islam, and The Moorish Science Temple of America Inc., where he served in the capacity of former Grand Sheik of temple 18, Mufti trainer and Sgt and mentor to many. He was an advocate of study and law awareness, as he would often quote, "Ignorance of the law is no excuse". He was also very active in prison ministry, where he was again, an active mentor and teacher to many.

In 2003, he met his life partner Tammy Snipes. Together they shared 18 years of love.

He is preceded in death by both parents and his sister, Sheila Doles.