To share your memory on the wall of Marian Boyd, sign in using one of the following options:

Marian was a graduate of Edward Drummond Libbey High School.

Marian was an avid bowler where she earned many awards and championships during her time. She won the City Doubles Tournament with her sister Bea in 1980s. She was one of the founding members of the Family Tree. A team with her brothers, sisters and other members of her family in the Ebony Mixed Classic where they won many championships. Marian also played softball for the Western A.C.s., her position was 2nd base. They were the first black women’s softball team to win a championship in Toledo.

Marian was preceded in death by her husband Charles Boyd, Sr., her parents, Arthur M. and Mary L. Jones, Sr., and her step-son Charles Boyd, Jr.

To send flowers to the family or plant a tree in memory of Marian Elizabeth Boyd, please visit our Heartfelt Sympathies Store.

Receive notifications about information and event scheduling for Marian

There are no events scheduled. You can still show your support by sending flowers directly to the family, or planting a memorial tree in memory of Marian Elizabeth Boyd.
Visit the Heartfelt Sympathies Store

We encourage you to share your most beloved memories of Marian here, so that the family and other loved ones can always see it. You can upload cherished photographs, or share your favorite stories, and can even comment on those shared by others.

Posted Jun 10, 2020 at 08:52pm
To the Family, your beloved Marian a devoted Mother, Grandmother, Great-Grandmother, Sister, Sister-in-law, Aunt, Friend and acquaintance to many will be missed. Even though Marian had stopped bowling years ago, the bowlers were so use to seeing Marian in the bowling establishments with family, she was still considered a bowler (smile). Lean on the Lord for comfort, strength and peace now and in the days to come.
In Sympathy & Prayer,
Bessie M. Mack
Comment Share
Share via:
LR

Posted Jun 10, 2020 at 04:49pm
In loving memory of Marion love the Robinson Family, And special friend of Terrell Kathy

Posted Jun 10, 2020 at 12:01pm
Marian, you are missed already.There will be no one able to wake you up and tell you," it's your turn to play". Rest IN Peace
Comment Share
Share via:
GJ

Posted Jun 10, 2020 at 10:44am
May your heart find comfort knowing that your love one is at home with the Lord
Love Gwendolyn E.March Jones & Family
Comment Share
Share via:
K

Posted Jun 09, 2020 at 10:12pm
My absolute sincere and deepest condolences to all of the family praying for comforting in your time of need.
Comment Share
Share via: 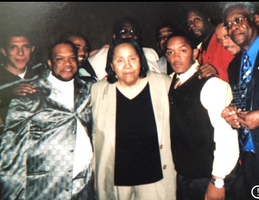