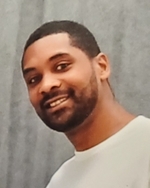 Leon Tenaj Pearson (36) was the youngest of 4 children born to the Union of Leonard and Janet Pearson. Born July 23rd 1983 he attended Nathan Hale elementary and graduated from the Alliance Academy of Toledo in 2003. He developed a love for boxing at the age of 14. He won multiple trophies and awards throughout his short career with the BullPen Boxing Gym thus becoming a Golden Glove & Silver Glove champion in his weight class of a 135 lbs. Leon was a loving, caring and humble person that was loved by many. He had a great sense of humor and a contagious smile. Leon was a devoted son, brother, nephew, cousin and friend that will be missed tremendously.