To share your memory on the wall of Leodis Cummings, sign in using one of the following options:

Print
Leodis Cummings was born on November 12, 1939, the eighth of 12 children to Eardis and Luvenia Cummings of Guntown, Mississippi. He passed away peacefully at home surrounded by family on February 2, 2020, at the age of 80.

Lee graduated... Read More
Leodis Cummings was born on November 12, 1939, the eighth of 12 children to Eardis and Luvenia Cummings of Guntown, Mississippi. He passed away peacefully at home surrounded by family on February 2, 2020, at the age of 80.

Lee graduated from Guntown-Lowe High School in 1957. He joined the U.S. Army in 1962 where he completed his food service training in Ft. Knox, KY, before going to Ausburg, Germany. He then served as an executive chef in the Army. Lee served one tour of duty in Vietnam (1967-1968) where he was awarded a Purple Heart. For his service, he was also awarded the National Defense Service Medal, two Good Conduct Medals, two Overseas Bars, Expert Badge with Rifle Bar, and Republic of Vietnam Campaign Medal. Lee was honorably discharged from the Army in 1970. He received his Associates in Food Service from Owens Community College in 1978 and was employed by the U.S Post Office as a Mail Handler Supervisor until he retired after 24 years.

Lee married his wife Peggye Fletcher in 1968 and they had more than 51 years together.

Lee was a member of Victory Life Worship Center under the pastorage of his nephew, Pastor Eric L. (Cheryl) Sherman. He served as an usher and part-time bus driver until his health failed.

Lee was especially loved by his many nieces, nephews and cousins and made sure to keep the family in touch with each other by helping to organize many family reunions and gatherings. An avid bowler, Lee was the captain of his bowling team and traveled to compete in many tournaments. Gardening was also one of his favorite pastimes where he grew his own vegetables and popcorn. He was a master in the kitchen where he loved to cook family meals and dinners to sell. He frequently canned pepper sauce and pear preserves.
Lee was preceded in death by his parents, five brothers and one sister. He leaves to cherish his memory his wife, Peggye; two sons, Lance (Zukeya) Lawshe of Carrollton, TX and Lee A. Cummings of Toledo, OH; two daughters, Pamela Towns of Toledo and Brandye (John Devlin) Cummings of New Orleans, LA; Goddaughter Tonette Williams of Toledo; four grandsons, Brandon and Alex Cummings, Benjanell Butler III of Toledo, and Isaiah Lawshe of Carrollton, TX; God-grandson, John Huntley, IV of Toledo; three granddaughters, Brooke and Brittany Towns of Orlando, FL and Lynnette Lawshe of Carrollton, TX; one beloved great-grandson, Benjanell Butler IV of Toledo; five sisters, Mabel Young, Ella R. (Bishop James R.) Sherman, Millie (Hardy) Thornton, Elder Margie (Elder M. C.) Mister and Martha (Deacon Worn) King all of Toledo.
Read Less

We encourage you to share your most beloved memories of Leodis here, so that the family and other loved ones can always see it. You can upload cherished photographs, or share your favorite stories, and can even comment on those shared by others.

Plant a Tree in Memory of Leodis
Plant a tree 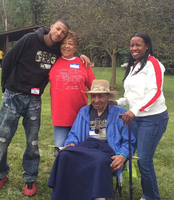 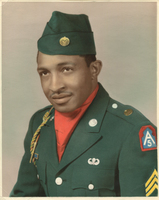