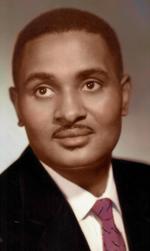 Johnny was honorably discharged from the United States Army after serving in WWII. He retired from the Toledo Jeep Corporation after 30 years.

Until his health began to fail, Johnny was a faithful member and Deacon of Indiana Avenue Baptist Church for more than 50 years.

Johnny was preceded in death by both parents; wife, Imogene; daughter, Leslie and son, Michael.