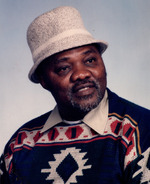 He was raised in Sherrill, Arkansas where he attended public schools. He later moved to Little Rock, Arkansas where he started building his life as an adult. He entered into marriage, had children and worked various jobs. He was a Taxis Cab driver in the mid 50's and later he became a Barber working at Granite Heights Barber Shop, sometimes taking his sins with him teaching them hair cutting techniques. In 1964 he and his family migrated up north to Jackson, Michigan and shortly after in 1965 to Toledo, Ohio, where he worked various jobs with Ford being one and later working his last job for over 30 years. He worked as a Construction Contractor and was a Heavy Equipment Operator often bragging about picking up a dime with a Back Hoe. John taught his first 3 sons, Theodis Kay Donnell and John the business when they were teenagers and later the younger sons including the grandchildren. John was very family oriented person. He loved being surrounded by family, and more the better. He would sit around the table with his children singing, playing some type of Wind instrument or maybe just baking up something. He loved singing gospel songs he even song in a gospel group for a time. He was lovingly called Buck Buck by all his grandchildren. he had friends of all ages. He loved them and they loved him. John lived life his way.