To share your memory on the wall of Jeronamo Diggs, sign in using one of the following options:

Provide comfort for the family of Jeronamo Diggs with a meaningful gesture of sympathy.

Print
Rev. Jeronamo "Jerome" Diggs Born May 4th 1963 in Paris, TN was the son of the late Ever Lee (William Edward Webb) of Paris Tenn. and the Late Charles Wesley Reynolds of Toledo Ohio

Mr. Diggs Graduated 1982 from Henry County High School where he was a four-year letterman Football Player, sung in the choir, was a library helper, and worked on the Junior Achievement Committee. In his early years Mr. Diggs was employed by Electric Prime in Rossford Ohio. He also worked to Habitat for Humanity, Smuckers, Goodwill and he enjoyed the fulfillment of being a professional wrestler. He was known as “Sweet Brown Sugar” to the wrestling community and dubbed his loving wife to be his Candy Yams, “you can’t have Candy Yams without Sweet Brown Sugar.” Following his wrestling career, Jeronamo Diggs became Reverend Jeronamo Diggs in November of 2012.

To send flowers to the family or plant a tree in memory of Jeronamo Diggs, please visit our Heartfelt Sympathies Store.

Receive notifications about information and event scheduling for Jeronamo

There are no events scheduled. You can still show your support by sending flowers directly to the family, or planting a memorial tree in memory of Jeronamo Diggs.
Visit the Heartfelt Sympathies Store

We encourage you to share your most beloved memories of Jeronamo here, so that the family and other loved ones can always see it. You can upload cherished photographs, or share your favorite stories, and can even comment on those shared by others.

Posted May 08, 2020 at 01:40pm
We are sorry to hear of the passing of Minister Jerome Diggs. We pray that the Lord gives you peace and comfort during the difficult days ahead.

Flowers were purchased for the family of Jeronamo Diggs. Send Flowers 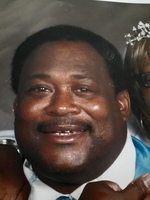