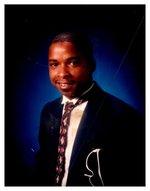 Mr. Jerome Hicks, 57, made his transition to his heavenly home Monday, November 16, 2020. He was born January 24, 1963 in Toledo, OH to the union of Mr. and Mrs. Shed and Mary Hicks. Both preceded him in death, as did his only son, Jerome Hicks Jr., his brother, Isaac Hicks Sr., and only sister, Irma Anderson.

He was a member of Glass City Church of Christ, and attended Jesup W. Scott High School. Jerome worked as a security guard on the night shift and he also was a truck driver.

Jerome enjoyed working on cars and boxing, but his main hobby was buying used motor scooters, taking them apart, fixing them, then putting them back together.