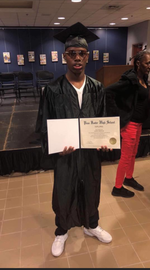 Jay was born on April 10, 2001 to Latrisha Richardson and James Smith Sr.

Jay Jay was a proud brother of five. He loved to take care of his brother and sisters. They were his pride and joy. He loved to be with his family and friends, but most of all, his girlfriend, Ariana Escobar, his first love.

He graduated from Penn Foster, where he went to further his education and to be his own boss. He was very cheerful, silly, and took pride in himself and his family. Every time you saw Jay Jay he was always smiling.