To share your memory on the wall of James Harris, sign in using one of the following options:

Provide comfort for the family of James Harris with a meaningful gesture of sympathy.

Otis was born in Pensacola, Florida, until his parents moved to Toledo, Ohio. Mr. Clark from Poor Clerks Barbershop give him his first start in the barber profession. Otis stuck with him until he was able to branch out on his own. They were really close. Otis made sure that he had the things he needed because he couldn't get around. Otis opened his own barbershop and become self-employed.He was self-employed for many years as a barber until he retired from Otis Barber Shop, where he enjoyed talking to his customers and his friends. He also belonged to the National Pioneer Gun Club Rifle Association. He enjoyed his family cooking, cars and going to the casino. He was a private person but knew people and knew how to talk to them.

He leaves to cherish his memory, his daughters, Angelina, Patricia, Martha, Karen; sons, James, William, Otis and a host of grandchildren, nieces, nephews, cousins and friends.

The viewing will be at the House of Day Funeral Home on Thursday, April 16, 2020, at 12:00 p.m with the funeral to follow at 1:00 p.m. The body will be laid to rest at Ottawa Hills Memorial Park. The family would like to thank everyone for their thoughts and prayers during this time.
Read Less

To send flowers to the family or plant a tree in memory of James Otis Harris, please visit our Heartfelt Sympathies Store.

Receive notifications about information and event scheduling for James

We encourage you to share your most beloved memories of James here, so that the family and other loved ones can always see it. You can upload cherished photographs, or share your favorite stories, and can even comment on those shared by others.

Posted Apr 15, 2020 at 08:18am
May your heart find comfort knowing that your love one is at home with the Lord
Love Gwendolyn E.March Jones & Family
Comment Share
Share via:
EI

Posted Apr 10, 2020 at 01:45am
Otis was my Barber for my entire life up until he retired. He was a wealth of knowledge as I sat in his chair growing up. He supported me my entire career. He checked in on me March 29 to asked me if I was OK with all that is going on with Covid-19. A true friend he was. He will be missed. Prayers for the Harris family.
Comment Share
Share via: 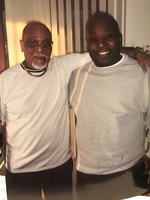