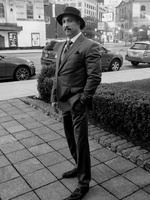 James Brown, 64, made his transition on the morning of April 1, 2021 at The Toledo Hospital. His beloved twin sister, Jackie was at his side, just like the day they were born on August 4, 1956.

James was a proud graduate of Calvin M. Woodward High School, Class of 1975. He was infamous to the North side of Toledo with his 10 siblings. James was well known for many things, including a heavy equipment operator and his dedicated 34-year career with Sun Oil Refinery (now PBF Energy). He was an AMAZING musician and enjoyed singing and playing bass guitar. He was well known as the lead singer of Pandemonium, a band which he started in high school. His love for music continued in his life as the bass player of Tantric Soul and Catch. He could often be found in his favorite lazy boy chair with his faithful dog, Buster Brown, watching SpongeBob Squarepants, his favorite show.

He was preceded in death by his loving parents, John Sr. and Naomi Brown, his sister, Nadine Sturdivant and his dog Annabelle.

Known to many as Jimmie, he will be most remembered by his loving, gentle spirit and incredibly good heart; and his authentic saying “It’s a beautiful thing!” Jim’s character was second to none! So many describe him as a “second father”; a testament to his kind, nurturing nature and dedication to his family. Jimmie will be truly missed..