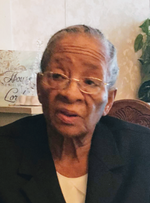 Mother Helen Suttles, age 83, made her transition to glory on January 3, 2020. She was born on March 5, 1936, in Osceola, Arkansas, to George McFarland and Louise Thomas, but was raised by Mattie Mitchell and Susie Collier.

Mother Suttles moved to Toledo, Ohio in the early 80's. She attended True Light Pentecostal Church around 85-86. Later, she became a member of Mount Hope, under the leadership of Pastor Haynes.

Mother Suttles was was a foster grandmother for CSB for many years.