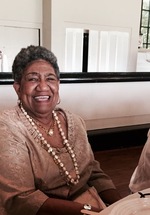 Hazel was born March 10, 1929 to Percy and Mary (Exum) Biggs in their Toledo East Side home. She was the youngest of five children.

After graduating from Waite High School in 1946, Hazel went to work as a nurse’s aide. It was then she decided to go to nursing school and become an LPN. Following a brief nursing career at Riverside Hospital, Hazel went to work for Rossford and Erie Ordinances where she remained until they closed. Hazel had to find another job. She became the third African American to be employed in the corporate offices of the former Libbey Owens Ford Co., retiring from the billing department in 1991 after 28 years.