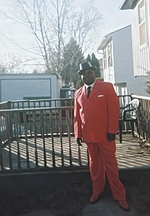 Freddrick Madave was born in Tallah Township, Grand Cape Mount County on August 12, 1957 to the union of the late Frances Moore and Foley Madave.

He began his early education in Tallah Township, and later transferred to Monrovia, Liberia. He was enrolled and attended Boys Town School in Marshall, Liberia. He later attended Bishop Ferguson High School until he decided to travel to the United States to pursue further education. Fredrick enrolled in Scott High School in Toledo, Ohio, where he graduated in 1978. In 1979, Fred was employed at Mercy Hospital in Toledo, Ohio, and later St. Vincent Hospital in Toledo, Ohio. He continued years of unbroken employment until his retirement.

During this period, Fred met his love, Mary King, and they were together for many years. Their union was blessed with two children. In August 1993, Fred got married to Lena Harris and was happily married for sixteen years. Fred later was engaged to Darlene Boose, the love of his life, who faithfully stood by his side and took care of him during his sickness until his passing.

Fred was a devoted Christian who loved the Lord and was an active member of The Braden United Methodist Church in Toledo, Ohio. Fred loved to fish, cook, play cards, and watch sports. The Dallas Cowboys was his favorite team. Fred will truly be missed by his family and friends.