To share your memory on the wall of Franklin Flaggs, sign in using one of the following options:

Franklin was a graduate of Waite High School and... Read More
Franklin G. Flaggs, Sr. was born in Wickliffe, Kentucky on October 31, 1934 to the late Lucian and Naomi Flaggs (Ross). He passed away on July 16, 2020 at the age of 85 at Hospice of NWO.

Franklin was a graduate of Waite High School and he attended Davis College. He served as a MP in the United States Army. Franklin was employed as a Machine Operator at Midland and Ross, formerly Unicast. He also worked as an orderly at Darlington House.

Franklin gave his life to Christ. and was the last surviving member of one of the founding family's of Shiloh Baptist Church. He served as an Usher and Trustee. Franklin was a dedicated and faithful member until his illness.

Franklin was an avid boxer, bowler and golfer. He was a Golden Glove boxer and boxed in six professional fights. He was known for his boxing skills while in the Army and in Toledo, Ohio.

Franklin was preceded in death by his son, Gary Flaggs; his parents, Lucian and Naomi Flaggs; and his sister, Yvonne Melton.

To send flowers to the family or plant a tree in memory of Franklin Gerald Flaggs Sr., please visit our Heartfelt Sympathies Store.

Receive notifications about information and event scheduling for Franklin

We encourage you to share your most beloved memories of Franklin here, so that the family and other loved ones can always see it. You can upload cherished photographs, or share your favorite stories, and can even comment on those shared by others.

Posted Jul 24, 2020 at 09:30pm
Our love thoughts and prayers are with you at the loss of your Father. The Brogdon Family

Posted Jul 22, 2020 at 09:18am
Bernetta our thoughts and prayers are with you and your family. The entire Care Management team is thinking of you and sending our love. 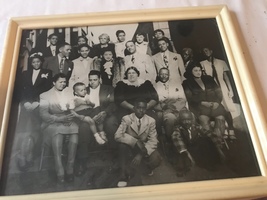