To share your memory on the wall of Fannie Ransom, sign in using one of the following options:

Provide comfort for the family of Fannie Ransom with a meaningful gesture of sympathy.

Fannie confessed and accepted Christ at an early age. Fanni... Read More
Fannie Mae Ransom, 83 years old, made her transition from earth to heaven on April 22, 2020. Fannie was born to the union of David and Molena (Bailey) Ransom on August 11, 1936.

Fannie was a loving and devoted; Mother, Grandmother, Sister, Aunt and Friend. Most of all, she was a “Devoted Child of God”.

Fannie worked for the Toledo Hospital in the dietary department for more than 30 years. She also worked at the Sunset House in Toledo, Ohio for more than 20 years. Fannie was a faithful member of the Mt. Pilgrim Baptist Church where she served on the Nurses Guild for more than 40 years until she became ill.

As we look over Fannies life, we will forever cherish her unselfish ways, unconditional love, warm demeanor and character. Those that knew Fannie, know the faith that she carried with her throughout her life. She was a soldier for our heavenly Father and a pilgrim of truth. The joy she received and gave when she was with her Son, Grandchildren and Family will never be forgotten.
Read Less

To send flowers to the family or plant a tree in memory of Fannie Ransom, please visit our Heartfelt Sympathies Store.

Receive notifications about information and event scheduling for Fannie

There are no events scheduled. You can still show your support by sending flowers directly to the family, or planting a memorial tree in memory of Fannie Ransom.
Visit the Heartfelt Sympathies Store

We encourage you to share your most beloved memories of Fannie here, so that the family and other loved ones can always see it. You can upload cherished photographs, or share your favorite stories, and can even comment on those shared by others.

Posted Apr 28, 2020 at 02:44pm
May your heart find comfort knowing that your love one is at home with the Lord
Love Gwendolyn E.March Jones & Family
Comment Share
Share via:
SF

Posted Apr 27, 2020 at 07:12pm
To the family of Fannie Ransom. You have our deepest condolences and our prayers are continuously with you. I know she will be missed and she was loved by many. She had a beautiful smile and I remember times when she would just watch her favorite shows and just be happy and get joy out of the small things like that. She has left an imprint on many lives. She will always remain in the hearts of those who cared and who loved her. May God keep his loving arms around you the family. God bless and be with you always.
With love the Woodson Foster family
Comment Share
Share via:
LB

Posted Apr 22, 2020 at 09:02pm
AG you all have been in my life since I was a little girl we are just like family know that I am here for you.
Comment Share
Share via:
YP

Posted Apr 22, 2020 at 08:17pm
AG I am so sorry to hear about your mom. Knowing that she is in a better place hopefully will bring some comfort to you. Had a lot of days laughing and talking to your mom and you. Had much LOVE FOR HER and FOR YOU.
FRIEND THEN AND NOW
VON
Comment Share
Share via:
T

AG, Alice and i are so sorry for your loss. We'll miss talking to Mrs Fannie and her beautiful smile. Sending prayers to you and your family.❤️❤️❤️❤️
GJ

Posted Apr 22, 2020 at 07:59pm
May your heart find comfort knowing that your love one is at home with the Lord
Love Sis.Gwendolyn E.March Jones & Family
Naomi Chapter # 25 O.E.S.
Comment Share
Share via: 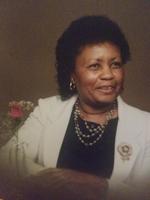