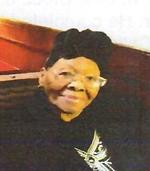 Ethel McCollum was born in Fayetteville, NC on August 11, 1920. She confessed her belief in Christ at an early age,

Ethel was later married to the late Johnny McCollum, Jr. and to this union one daughter was born, Barbara J. McCollum-Woods.

Mrs. McCollum was in Poinsettia Committee for 20 years. She truly loved her church and her family. Her hobbies were cooking, gardening, making the best sweet potato pies, and blueberry cobbler.

She loved to walk and has taken the hill at Ottawa Park three times. Only Greg Meredith can tell you about the ride on his Harley motorcycle. She is noted for her famous greens, mustard, turnips, and collard all mixed together.