To share your memory on the wall of Ethel McCollum, sign in using one of the following options:

Print
Ethel McCollum was born in Fayetteville, NC on August 11, 1920. She confessed her belief in Christ at an early age,

Ethel was later married to the late Johnny McCollum, Jr. and to this union one daughter was born, Barbara J. McCollum-Woo... Read More
Ethel McCollum was born in Fayetteville, NC on August 11, 1920. She confessed her belief in Christ at an early age,

Ethel was later married to the late Johnny McCollum, Jr. and to this union one daughter was born, Barbara J. McCollum-Woods.

Mrs. McCollum was in Poinsettia Committee for 20 years. She truly loved her church and her family. Her hobbies were cooking, gardening, making the best sweet potato pies, and blueberry cobbler.

She loved to walk and has taken the hill at Ottawa Park three times. Only Greg Meredith can tell you about the ride on his Harley motorcycle. She is noted for her famous greens, mustard, turnips, and collard all mixed together.

To send flowers to the family or plant a tree in memory of Ethel Lee McCollum, please visit our Heartfelt Sympathies Store.

Receive notifications about information and event scheduling for Ethel

We encourage you to share your most beloved memories of Ethel here, so that the family and other loved ones can always see it. You can upload cherished photographs, or share your favorite stories, and can even comment on those shared by others.

Posted Jun 22, 2020 at 09:36pm
Barbara Jean, may the god of comfort bring you the peace that passes all understanding and the assurances of his loving presence during this time. God will give you peace and strength just wait on him.
Little Louise Green
Comment Share
Share via:
DF

Posted Jun 22, 2020 at 01:52pm
God blessed Aunt Ethel with a long and blessed life. She will be dearly missed by her family in North Carolina. Barbara Jean you are in our prayers.

Posted Jun 17, 2020 at 12:28pm
Barbara you have my sincere sympathy your mom has left a void in this community and especially at Warren AME Church may God continue to bless you
Comment Share
Share via:
GJ

Posted Jun 16, 2020 at 09:18pm
May your heart find comfort knowing that your love one is at home with the Love
Love your cousin Gwendolyn E.March Jones & Family
Comment Share
Share via: 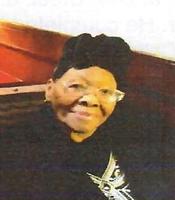