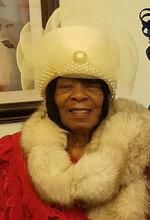 Mother Emma Ellen Johnson, “The Fox” started her journey into heaven on Saturday, February 6, 2021, at the age of 91, from her home, where she resided with her daughter Traci “TJ” Johnson, in Columbus, Ohio. Ellen was born on January 13, 1930 in Gary Indiana. Her parents: Westley James Johnson and Mildred Hortence Richardson - Johnson were in Water Valley, Mississippi, they eventually migrated to Toledo, Ohio. Ellen is the oldest of three (3) children.

Mother Ellen Johnson professed Christ as a teenager under the pastorate of Elder M. H. Hawkins, 336 Wabash Avenue, Toledo, Ohio, which later became Zion Church of God in Christ in Toledo, Ohio. Ellen had a phenomenal voice, and she shared her talents as a member of the church choir and usher board. She later attended and become a member of St. James Holiness Church and upon moving to Columbus, Ohio, Mother Johnson became a member of Resurrection Power, Church of God In Christ under the direction of Pastor Franklin Culver, whom she loved, until she went to Heaven.

As a single mother, education was the driving force. Raising 4 kids was not easy, her prayers, tears, hard work and sacrifice produced successful children: A Homemaker, Quality Engineer, Network Manager and Business Owner/Politician. Ellen was strong, resilient, confident, and PROUD OF HER CHILDREN AND THEIR ACCOMPLISHMENTS.

Mother Johnson began her professional career as a suburban kindergarten teacher but felt a calling to use her talents and abilities to empower pre-school children of low-income families through the Economic Opportunity Planning Association(EOPA) of Lucas County as a Social Worker. Her professional career spanned over 35 years where she received numerous awards and Proclamations for her sincere commitment and outstanding services; from the Mayor of Toledo and the Ohio House of Representatives of the General Assembly of Ohio.

Mother Johnson enjoyed paying her TITHES and she loves sports cars. Her first car was a “muscle car” called the Ford Falcon. Her favorite colors are purple and pink. Her favorite restaurants are Apple Bees and Cracker Barrel. Favorite shows are Let’s Make a Deal with Wayne Brady, Wheel of Fortune, Jeopardy, Criminal Minds and NCIS Los Angeles or any show with Shemar Moore or LL Cool J. Favorite song is, “We Fall Down” by Donnie McClurkin” and at 9:00pm every night she had a chocolate chip cookie and a can of Pepsi. She made everyone pray at 11pm every night. Her favorite scripture: In all thy ways acknowledge him, and he shall direct thy paths. Proverbs 3:6.