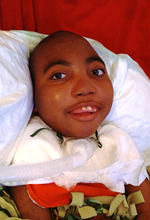 Dylan James Harris was born in Toledo, Ohio to Aaron Harris and Jerrie Conner on June 12, 2003. He entered this world with his twin sister Dylane.

As an infant, Dylan was diagnosed with microcephaly, tracheomalacia, epilepsy, and cerebral palsy. Despite his health conditions, Dylan was full of life. He expressed himself through his eyes. His joyful spirit was contagious and his smile brought happiness to everyone's heart.

Dylan was a loving son, grandson, brother, uncle, nephew, and cousin. He was also a junior at Reynolds School where he did arts and crafts and other forms of therapy.

Dylan was our superhero. Courage and strength were his superpowers. In 2012, Make-A-Wish America gifted Dylan a family vacation to Disney World. In 2015, he was honored by the Cerebral Palsy Family Network as "Hero of the Day". He was deeply loved and brought immense joy to everyone who knew him.