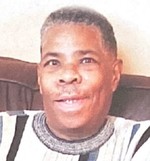 Dwight Tyrone Harvey Sr. was born May 1, 1956 in Toledo, Ohio, to Thomas Sr. and Wylma Harvey.

He was a member of Mt. Pilgrim Baptist Church under the pastorship of Rev. S.M. Coleman from a young age.
His early education included, Pickett Elementary and a graduate of Libbey High School's class of 1974. He was an inspector with Doehler Jarvis Industries for 30 years. He spent the latter part of his adulthood and eventually retired from Coyne Deliveries.

Dwight never met a stranger and spreaded his contagious personality all over the city, along with his love for the Cleveland Browns and the Los Angeles Lakers.

On June 6, 2020, Dwight departed this life. He was preceded in death by his parents and older brother, Robert Harvey.