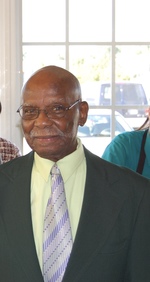 Born on a farm in Effingham County, Florence, South Carolina, to the unity of Ernest and Mary Graham-Ham on October 12, 1926, Mr. Ham was the youngest of 9 children: Clarence, Otto, Snowanna, Marie, Annabell, Clyde, Elijah, and Moses Ham, who have all preceded him in death.

Mr. Ham relocated to Toledo, Ohio when he was 16 years old and met the love of his life, Fannie Lue Williams, who had also moved to Toledo from Albany, Georgia. They would soon marry in 1946 and have 12 children together. He cherished his wife from the very day he met her until her death in January of 2013.

Mr. Ham was an active member of Greater St. Mary’s Missionary Baptist Church until the decline of his health; but he still stood as a well known and respected member. He worked for 37 years, as a forklift driver, for Doehler Jarvis until his retirement in January of 1989. Mr. Ham will be remembered for many things he’s done in his 93 years of living. Like being a loving and kind husband, a phenomenal father, a hardworking man, and a gentle soul who had touched the lives of many. Mr. Ham enjoyed sitting on his porch with a cold Pepsi and ice cream, watching tv shows like Texas Ranger, Gunsmoke, The Price Is Right and Family Feud, spending time with his grandchildren, and humming church hymns peacefully throughout his home. He loved and served the Lord each day of his life, and now has been rewarded with Our Father in Heaven for eternity.

Children of Mr. and Mrs. Ham who have gone to Glory are Marvin, who passed away untimely after childbirth, and Laura-Lee (Morris) Milton who passed away after a courageous battle with lung cancer, in July of 2015.

Mr. Ham lived an incredible full life, filled with love and family. He will forever be remembered as our leader. We will miss him dearly.

We will celebrate the life of Mr. Ham on Saturday, June 27, 2020 at Greater St. Mary's Missionary Baptist Church at 416 Belmont Avenue, Toledo, Ohio. Visitation will begin promptly at 10:00 AM and the service provided by Pastor Robert L. Lyons will begin at 11:00 AM. Please respect social distancing guidelines set by the State of Ohio and Greater St. Mary's Church.