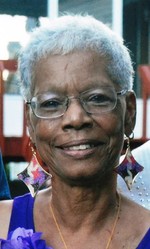 Carol Yvonne Steward, 72, of Toledo, Ohio departed this life on Tuesday, May 5, 2020, in her home with her loving sons.Carol was born September 13, 1947 to Geneva and Curley Cooks in Toledo, OH. She retired from the Lucas County Sheriff’s Department after 26½ years. One of her fondest memories was serving on security detail of President Elect Obama.

She made her profession her Ministry -- advocating on behalf of troubled youth and families. She was an evangelist whose pulpit was the community of the City of Toledo. Many times, whether in or out of uniform, she would preach to, pray for, and share bible scriptures with youth, teenagers, and families of all walks and ages. Carol was a 20+ year devoted member of the Walls Memorial Chapel, and she spent her spare time administering bible study programs, back to school programs, vacation bible school, contests, and various activities to children and families of the Lucas Metropolitan Housing Authority. Because she took advocating for children and families so seriously, she was sentimentally named the “Angel With A Badge.” She is also sentimentally known as the “Co-Founder” of her neighborhood block party.

Carol was preceded in death by her parents, Geneva and Curley; her brothers, James Cooks and Charles Cooks, Sr.; and granddaughter, Kimberly Paige Lopez-Steward.