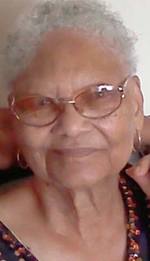 Bessie Lee Battle was born on January 26, 1931 to Jesse and Coreaster Chatman in Valhermoso Springs, Alabama. At the age of 18 Bessie married the love of her life, Albert Battle on her birthday January 26, 1952. United into their marriage they had three children. Ralph, Ray and Josephine Battle. They later moved their family to Toledo, OH. Bessie served the Lord while being a devoted wife, mother, grandmother, sister, aunt, and care taker to many. Bessie was a faithful member of Southern Baptist Church of Toledo, OH, after many years of being a devoted wife. Bessie entered the work-force working with individuals with disabilities, retiring from the Lucas County Board of Developmental Disabilities. Bessie loved traveling, fishing, family, friends, playing cards and having a "green thumb" when it came to gardening. But what brought her heart the most joy was her "open door policy" to all her family, friends and neighbors. Bessie never met a stranger. Her love and compassion towards others is how she earned the famous nickname "Pie", given to her by her daughter in law Peggy Battle. Bessie was truly "sweet as pie" and she will always be loved and remembered.